Is Your Letter of Intent an Accident Waiting to Happen?

I was talking with a friend of mine (“Bill”) who has been a business aircraft pilot for more than 50 years, rated on many types of corporate aircraft. We were

I was talking with a friend of mine (“Bill”) who has been a business aircraft pilot for more than 50 years, rated on many types of corporate aircraft. We were discussing the Asiana accident at San Francisco International Airport a few years ago in which a commercial airliner crashed on final approach. Both of us watched the newscast of the aftermath online while we were talking on the phone.

After listening to the press briefings and information about the approach, Bill said “you know Stew, that accident happened at 30,000 feet.” That was an odd statement. It crashed on the runway, didn’t it? Bill said, “what I mean is that the decisions and planning (or lack of it) made well in advance of final approach caused the accident.” Low and behold, the NTSB later concluded that the probable cause of the accident was the flight crew’s mismanagement of the aircraft’s descent during visual approach (including due to the lack of training on planning and executing visual approaches).

Planning an aviation transacting skillfully and thoroughly demands a carefully prepared letter of intent—it’s the difference between soaring and crashing. I was thinking about how I feel, as an attorney that handles aircraft transactions, each time I receive an email from a client saying “We’re buying a business aircraft and just signed a letter of intent/offer to purchase. It’s attached. Can you help us with the purchase agreement?” Going through my mind is “Umm, well, you did what?!” A client whose business is real estate, or venture capital, or widget-making, signed something (prepared by someone) to buy a multi-million dollar aircraft. Essentially, the client tried to “land” the transaction without experience in the space or legal assistance, much like operating a complex aircraft from a manual drawn on the back of a cocktail napkin.

“Stew, why get hung up on the letter of intent? It’s non-binding and it doesn’t matter. It’s a throw-away.” The letter of intent (sometimes called an offer to purchase) is the roadmap for the transaction. It should contain important elements so that (i) the parties have a meeting of the minds on the terms of the transaction, (ii) the purchase agreement negotiation is efficient due to clarity of deal terms in the LOI and (iii)
the buyer (or seller) is protected from commitments and exposures that they don’t understand.

The letter of intent is a legal document which, if not drafted properly, can result in – you guessed it – a “crash on the runway,” meaning, of course, that the transaction de-rails. LOIs come in all shapes and sizes and differ in their approach depending upon the skill and objective of the person that drafted it. Often we see a letter of intent that says very little – the “wet your whistle” variety– with few terms other than deposit, purchase price, basic delivery conditions, and a commitment to sign a purchase agreement. Sometimes they do not contain the most basic of terms like a way to exit if the purchase agreement isn’t executed within a certain time period, or identify whether the transaction is “soft” (a rejection right) or “hard” (without a rejection right) or whether it is “binding” or “non-binding.” Even a short “basic” letter of intent can be a recipe for disaster, or at minimum cause the client to spend a lot of time (and money) only to find that the buyer and seller had very different understandings of the transaction with no mechanism to terminate without liability or an accusation that the LOI was in fact a binding contract.

Much like a proper approach to landing, an aircraft acquisition or sale requires proper planning at or prior to the letter of intent stage using a team of advisors experienced in the space, much as you would for the purchase of any other multi-million dollar asset or business. The earlier that team can be involved in planning for the transaction (that is, the
“higher the altitude”), the more likely that a buyer or seller will not find itself in an “un-stabilized approach.”

Does Business Aviation Have a Use for Social Networking? 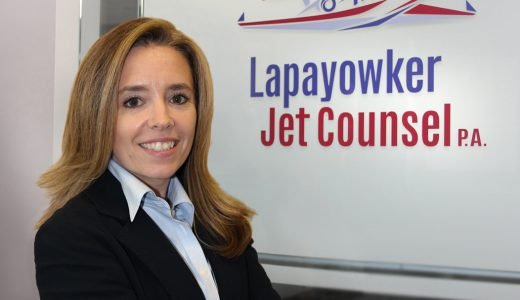